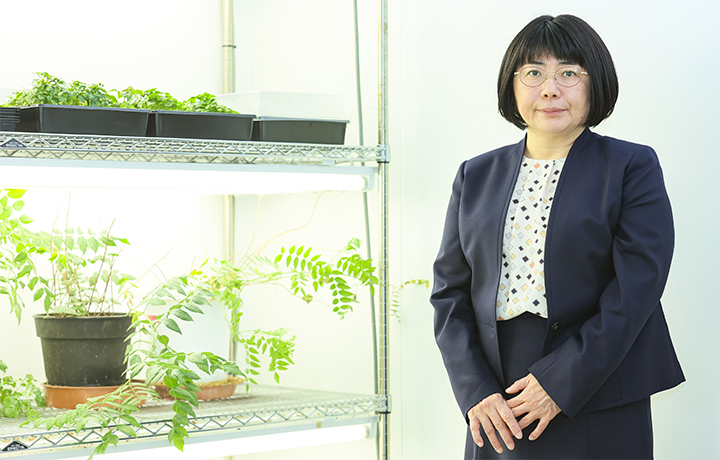 The use of plants as medicines can be traced to ancient Greece. We interviewed Professor Mami Yamazaki, who is fascinated by plant diversity and has devoted herself to researching plants for medicinal purposes. She told us about the various compounds produced by plants—known collectively as phytochemicals—and her vision for a sustainable future “pharmaceutical plant,” in which plants themselves biosynthesize pharmaceutical products which are currently synthesized in factories.”

A fascination with the phytochemicals that plants create.

What exactly are phytochemicals?

Phytochemicals, as the name suggests, are chemicals produced originally by plants. There are records that plants have been used as medicines ever since the ancient Greek era. People during that time chose herbs as a remedy when they felt unwell, even though they did not understand why these plants were effective. In addition, knowledge of medicine also involves a certain amount of mysticism. In Japan, one still hears about the anecdote that willow trees, which are effective against headaches, were used for the beams of Sanjusangen-do*, which were built by Cloistered Emperor Go-Shirakawa, who suffered from chronic headaches, with the hope of getting relief from the headaches.

*A temple in eastern Kyoto that is famous for its 1001 statues of the goddess of mercy. The temple was built for Cloistered Emperor Go-Shirakawa in 1164; however, the original building was destroyed in a fire in 1249. The building was reconstructed in 1266 and survived to the present day.

In modern times, with the development of organic chemistry, which has its roots in alchemy, compounds with medicinal properties or phytochemicals have become more widely recognized. For example, in the 19th century, it was discovered that willow bark, effective against headaches as mentioned earlier, contains Salicin—a compound with analgesic effects. Aspirin, an antipyretic analgesic with few side effects, was developed based on this discovery.

Furthermore, in the 1980s, rapid progress was made in the field of molecular biology. As a result, it is now possible to investigate the mechanisms underlying the chemical reactions and the production of substances within plants, at the genetic level. A single plant might produce as many as 2,000 types of phytochemicals, and it has been found that dynamic synthetic reactions occur within small plants.
I was fascinated by the fact that “quiet” plants serve as “factories” that produce a wide variety of phytochemicals inside.

Why do plants make phytochemicals?

One can argue that plants have survived by choosing “immobility” rather than being forced to be “immobile.” Instead of moving, they use phytochemicals to protect themselves and reproduce. For example, polyphenols protect them from UV light, and the fragrance that plants produce attracts insects to the flowers, creating an opportunity for pollination. Phytochemicals are, thus, a survival strategy for plants since they are immobile.

Many phytochemicals are unique, being produced only by specific species. In addition, of the 220,000 to 260,000 species of plants on earth, only a small portion have been studied, and it is thought that there are still a vast number of undiscovered and potentially very valuable phytochemicals.

Why is research into medicinal plants and phytochemicals so popular right now?

There are many species of plants with medicinal uses. Searches for medicinal resources have been carried out actively since the Age of Discovery, but the modern era has seen fewer searches. Then came the genome sequencing era of the 2000s. It dramatically increased the speed at which research took place and completely changed the concept of biology. Furthermore, with the advent of next-generation sequencers around 2015, analysis costs fell, and decoding accuracy improved, making it possible to analyze diverse plants at the genome level. This resulted in a surge in research on medicinal plants.

Please tell us about the plants you are researching.

In 2021, our research group undertook whole genome sequencing of Ophiorrhiza pumila. Ophiorrhiza pumila is a member of the Rubiaceae family, including the coffee plant. Native to the Okinawa archipelago and the Amami region, it is a small plant that grows to a height of about 20 cm and produces clusters of delicate, white flowers.
You may not have heard of Ophiorrhiza pumila, but it is a valuable medicinal resource used to produce Camptothecin, a raw material used in the anticancer drug, Irinotecan. We collaborate with other faculties, as well as external laboratories such as RIKEN and the Kazusa DNA Research Institute, to study Ophiorrhiza pumila.

In 2019, we established the Plant Molecular Science Center. Besides the Faculty of Pharmaceutical Sciences, we’re conducting joint research with the Faculty of Horticulture, where the researchers are the real pros of growing plants.
Ophiorrhiza pumila prefers a very moist environment. Since it is vulnerable to dry conditions, it is difficult to grow it outdoors in the Chiba area, where it quickly withers and dies, thus negatively impacting the timeliness of our research.

Therefore, we reached out to Professor Eiji Goto of the Faculty of Horticulture with the hopes of recreating optimal growing conditions. Since Ophiorrhiza pumila prefers humid conditions, he encouraged us to try hydroponics. With proper temperature and nutritional conditions, we are now able to proceed with experiments using plants that grow in our laboratory. As such, through our joint research and synergistic efforts, we have created a significant impact.

What is the role of your group in joint research on Ophiorrhiza pumila?

We are investigating how and what kind of phytochemicals are metabolized and biosynthesized in Ophiorrhiza pumila, using metabolome analysis* and transcriptome analysis**. As a basis for usage, we first decoded the Ophiorrhiza pumila genome. With genomic information, it is possible to know in detail, when, where, and which genes are expressed, which significantly increases the accuracy of the metabolomic analysis.

How are phytochemicals detected?

Since phytochemical volume is minimal, we use a device known as a Liquid Chromatograph-Mass Spectrometry, the accuracy of which has improved significantly in recent times, for our analysis. This equipment has enabled us to identify components in substances that could not be isolated from plant tissues.

By combining various methods, we succeeded in identifying, for the most part, what substances are produced and in which order by Ophiorrhiza pumila. We subsequently found that certain substances are manufactured the same way in several plants up to a certain stage. Plants make a wide variety of phytochemicals from the same materials. Determining the structure of a single protein is a daunting task, but the structure of the protein thus obtained was so accurate that it can only be described as splendid! I am always amazed by the elaborate mechanisms of plants!

What do you think future research on Ophiorrhiza pumila will involve?

Well, one area of research we are considering would involve incorporating pathways to synthesize Camptothecin into other plants or microorganisms that grow faster than Ophiorrhiza pumila. We believe that this research will make it possible to obtain higher yields of Camptothecin. Also, by modifying the proteins involved in the biosynthesis of Camptothecin, it might be possible to produce structural analogs with slightly altered Camptothecin structures. These structural analogs are expected to be effective in overcoming drug resistance, which is now problematic in anticancer drug therapy.

A sustainable and eco-friendly “Pharmaceutical Plant”

The mechanisms of plants are more ingenious and surprising than expected

We can truly learn a lot from plants. Living things have essentially evolved over 500 million years through a process of trial and error. Errors are deadly to an organism. The plants we see today are the heirs of optimal solutions resulting from many sacrifices that have allowed their survival in the present day.
Unraveling the mystery of plant mechanisms implies clarifying information on survival strategies cultivated over 500 million years. I believe this is of the utmost significance.

Furthermore, plants use light energy to bio-synthesize a wide variety of phytochemicals, primarily from water and carbon dioxide. Compared to industrial synthesis, this is an environmentally friendly synthesis method that is energy-efficient, helps deplete carbon dioxide, and does not produce hazardous waste. What if plants could bio-synthesize medicines currently being made in factories? Put another way, if we could build a “plant-based pharmaceutical factory,” this approach would surely go a long way toward making the world more sustainable.

Unraveling the sophisticated mechanisms of plants and utilizing them as information resources common to all humankind. That’s the mindset we bring to our research.