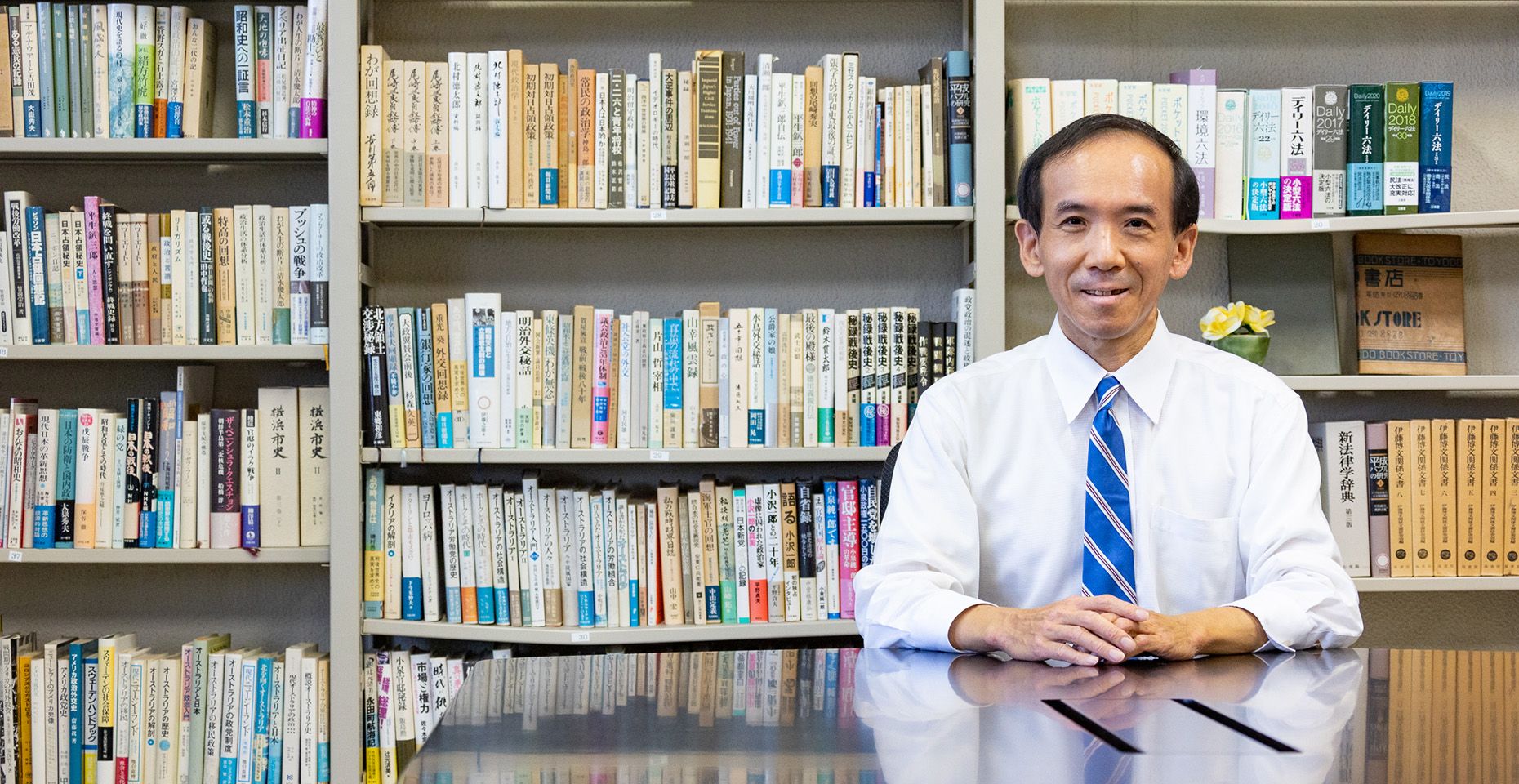 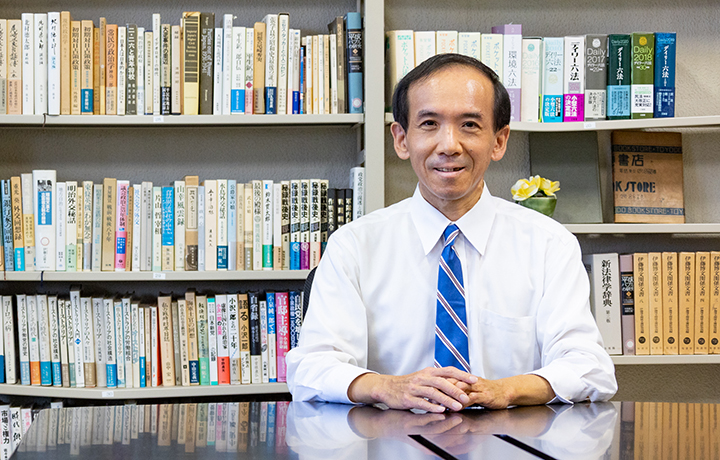 The interplay between people, society, and disasters generates various social phenomena.Why do different countries and regions perceive disasters differently? What is a flexible, strong, and resilient society?

With insights and knowledge derived from the perception of social systems, Professor Jiro Mizushima, the head of the Division of Social Sciences in Disaster Management at the Research Institute of Disaster Medicine, Chiba University, is tackling these complex questions. We interviewed Professor Mizushima, who is reexamining the state of society in times of disaster, concerning the state of societies that are experiencing disasters, and the prospects of research.

Although the disasters may be the same, their perception varies depending on the region

What is the significance of the Division of Social Sciences in Disaster Management participating in the Research Institute of Disaster Medicine?

Not only do disasters greatly impact aspects of natural phenomena or our physical bodies, but they also affect our human and social relations. They may, therefore, be considered social phenomena. The current COVID-19 pandemic is a good example of the significant differences in the social phenomena—such as the responses, infection rates, and the number of infected people—that have emerged depending on the country or region. Such differences based on countries or regions are expected from the humanities and social sciences perspective. However, from the perspective of natural sciences, this raises questions, such as, “Why do differences occur when we are all human beings?”

In this context, insights and knowledge of the humanities and social sciences, which study the disaster society itself, are indispensable.

In particular, which perspectives are important in the humanities and social sciences?

Let’s look at the characteristics of society revealed by the COVID-19 pandemic on two axes: administrative control and social control.

Administrative control refers to direct prohibitions and mandates, such as those that come through laws and decrees. Social control occurs at the citizen level, such as when people voluntarily cooperate with one another or regulate each other’s behavior. If the strengths and weaknesses of these controls are classified into a quadrant of categories, and an international comparison is conducted concerning the countermeasures and the spread of infections, the characteristics of Japanese society come into focus.

With weak administrative control and strong social control, Japan is categorized as type three, falling in the third quadrant. Even though a state of emergency was issued many times, it did not lead to a lockdown, and restrictions on actions were in the form of requests. Yet, self-restraint among citizens has spread, such as with mask-wearing, sheltering-in-place, and closing dining establishments. Thus, social control permeated society in a way that aligned with the government’s administrative intentions.

You can see, even with the same virus or natural phenomenon, when the systems involving people and society differ, their subsequent impact differs greatly.

The “Sphere” of Relationships and How They Interact with Impact Behavior

I can see that different countries have different ways of thinking and responding.

I think it is important to have the perspective of “spheres,” or communities, which indicates the scope of connections when looking at how people and society interact, especially when considering Japan, where there is a strong sense of social control. Since many Japanese belong to either a local community (a regional sphere) or a work community (an occupational sphere), we can reach individuals when we mobilize these two. Therefore, in Japanese society, things tend to go well when things are put into operation in spheres such as the local or occupational communities.

In the same way, with natural disasters, Japan tends to emphasize local communities to provide mutual aid—such as through neighborhood associations—and preparedness at the workplace level.

In this way, while Japan can respond to situations with flexibility when matters are handled and controlled within a smaller “sphere,” such as in a local community or workplace, it is also true that they become rigid in their attempt to equalize. For example, Japan’s public schools were slow to respond to offering online education when people were under voluntary control due to the COVID-19 pandemic. However, I think the reason behind this delay was the emphasis on equality and the intention to be fair. As they tried to be fair to all, they equally distributed printed assignments to be worked on at home. This mentality does not give rise to new possibilities. There is a difference between “equality” and “fairness.” Fairness ensures that everyone gets a fair result based on their individual circumstances. In this case, it was necessary for us to think about fairness with the intention of getting everyone online.

A clue to solving this problem is the attitude of accepting diversity. One needs to think about what resources we have, what abilities people have around us, and how they can be mobilized. Establishing rules for cooperation through actions that make the most of each individual’s characteristics while acknowledging diversity is important. Fairness, or happiness for all the people involved in a sphere, is an extension of this thinking.

In such moments, I wish that people remain careful not to lose sight of the spirit that appreciates and enjoys diversity. Even if the results of actions that came from diverse characteristics were not what you expected, it is important not to think of it as a failure but to have a sense of amusement.

Deepening the strengths of regional diversity and expanding possibilities

In the face of disaster, having fun or being amused seems inappropriate.

Of course, pursuing inappropriate jokes and self-righteous fun is out of the question. However, we need to look at the expansion of individual lifestyles and the development of society from a mid-to-long-term perspective. If we have a mindset to recognize and accept diversity, we will treat each of our characteristics as valuable. The new power generated through enhancing each other’s values, believing in diversity and potentialities, having vigor and joy, and being amused by diversity will lead to innovation that will change the course of history. You can’t come up with positive ideas in a society where you can’t even crack a joke. Rather, it can be said that a system in which we can frankly state what we are amused about without reservation is necessary if we wish to maintain the sustainability of a society.

What are some of the initiatives that you enjoy or find interesting?

While this happened before COVID-19, we had a seminar activity in which we had students join the merchants of the shopping districts and participate in festivals or attend gatherings celebrating senior citizens from the perspective of promoting health and community building. The students were coming up with ideas that shared how they thought if they did this or that next time, it would be more fun, how they would like to try this or that idea next time, or saying that they would like to share some food they enjoyed with more people. They were full of vigor and joy. The locals start to get involved in the fun and joy the students bring with them and start to express their strengths.

In thinking of the future, to build resilient communities in the face of disasters, it is important not only to impose policies from above, but it is also important to have a system that incorporates elements of enjoyment while working out the policies with the region. Even when it comes to disaster prevention maps, it shouldn’t be that we simply distribute a piece of paper explaining where things are, what locations are safe and could protect lives, but rather we could share such information by engaging in network building through enjoyable events, for example. Such activities will lead to a society that affirms the well-being of its members, fostering their physical and mental health and offering an abundance of social connections, which, in turn, creates a resilient society. Students involved in these activities continue to be active across the nation even after graduation.

In recent years, redevelopment of waterfronts has been commonplace in many parts of the world; but Amsterdam has “floating houses.” The rising sea levels caused by global warming are a serious problem for the low-lying Netherlands. In response to this challenge, the idea of floating on the sea completely reverses thinking from that of creating hard and rigid seawalls. In this approach, they have also chosen to enjoy their daily lives gracefully on the sea. This thought process in which they approached the floating house, “it may not work, but let’s give it a try,” can be said to be a symbolic representation of how we think about resilient societies.

Tell us about your prospects for future research

Whether it be a natural disaster or the appearance of a virus—from the perspective of natural science, they are but another phenomenon. But when they overlap with local characteristics, they can trigger social phenomena and major changes in human behavior. Focusing on this behavioral characteristic, we must explore ways to create social systems that promote sustainability while acknowledging the diversity of a region; this is the role of the humanities and social sciences.

There are many divisions that deal with medicine, nursing, health, and other areas at the Research Institute of Disaster Medicine that interact with its regional society. Additionally, many things can be analyzed by collaborating with science and engineering-related departments, such as the Department of Information Engineering. I hope, with a diversity of insights and knowledge, the researchers’ interactions will open up new vistas of possibilities.