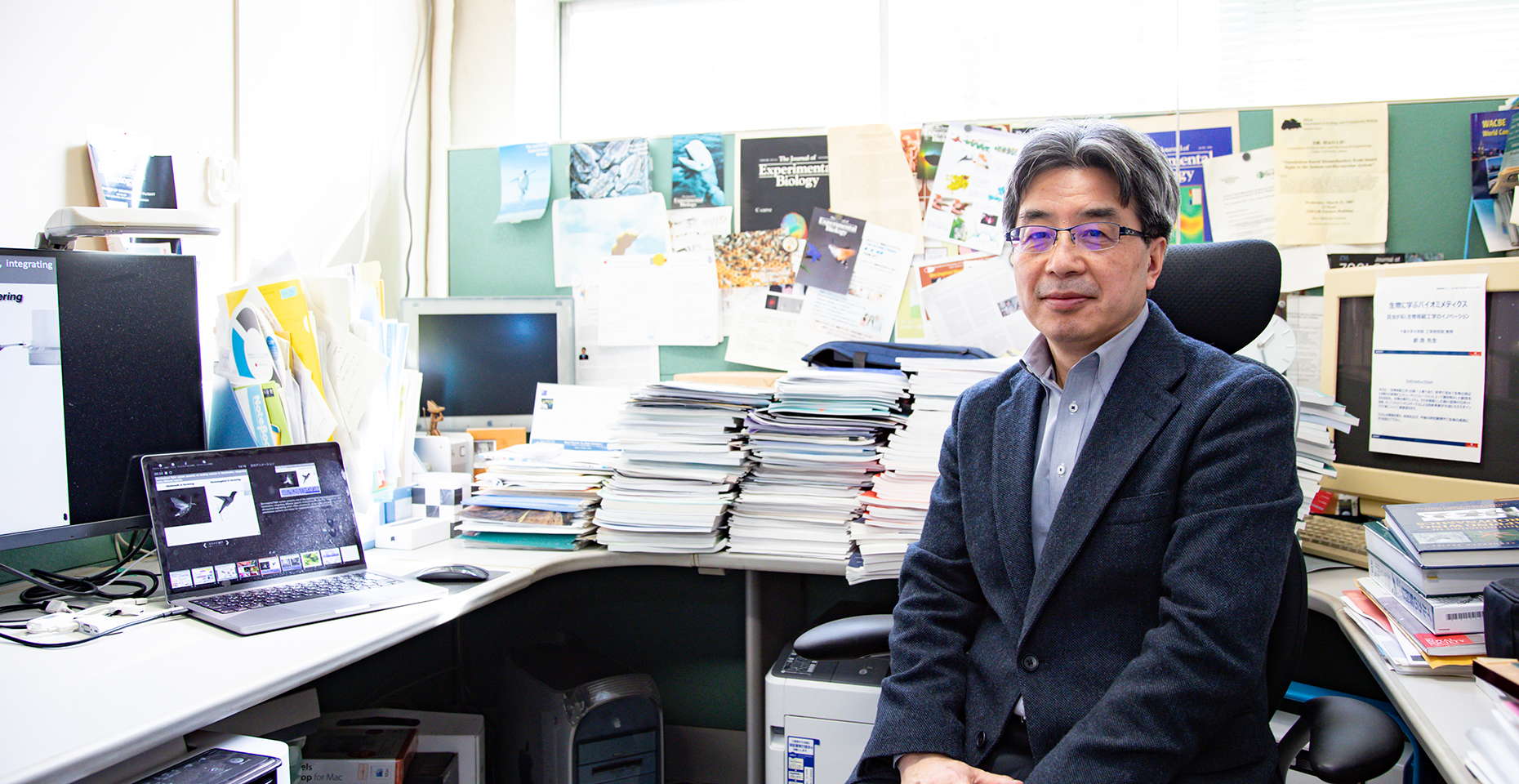 In February 2022, the international scientific journal Nature published a photograph of a small beetle with feather-like wings on its front cover. The photograph was taken from one of the research articles on insects’ flight mechanisms in the special issue. One member of the international research group that contributed to this article was Prof. Hao Liu (Hiroshi Ryu), who is associated with the Graduate School of Engineering at Chiba University.

Prof. Liu has conducted research on biomimetics* and has applied his findings to the design of drones and for suggesting techniques to develop “smart drones.” Because of its uniqueness and potential for real-world applications, Prof. Liu’s research has been featured in various media outlets. We interviewed Prof. Liu and asked him about his research in detail, especially the path leading to this research topic.

*The study of the formation, structure, or function of biologically produced substances and materials and biological mechanisms and processes, especially for the purpose of synthesizing similar products by artificial mechanisms which mimic natural ones (Merriam-Webster).

I obtained a degree in Ship and Marine Engineering from Yokohama National University. Then, I joined the Ship Research Institute of the former Ministry of Transport. There, using computer simulations, I studied the mechanism of the formation of waves created by tanker ships on the ocean surface.

Subsequently, I participated in the national project titled “KAWACHI Millibioflight,” led by Prof. Keiji Kawachi at the University of Tokyo. It was the first time that I was involved in insect flight mechanism research. The KAWACHI project was the first national project focused on insect flight. I joined that project in 1993 and continued my research on the dynamic simulation of insect flight until 1997. I think this was a truly pioneering project at the time, as it combined biological flight research and computer simulations.

When I transitioned to the field of biology after spending some time in marine engineering, everything was novel and intriguing to me. The structure of every component in a living system I looked at was soft and flexible, unlike solid inorganic materials. When dealing with a solid structure, I get one output if I input one variable. However, the soft structures of organisms are varied, and one does not know how many different results one might get after inputting one variable. Through evolution, organisms have developed both active and passive parts that coexist in their systems. This duality in functionality creates considerable structural and dynamic intelligence, which we may consider ‘smart systems or passive- and active- mechanisms.’

These smart systems are extremely robust and can cope with various environmental changes. Additionally, we recently found that these systems are not necessarily performing mechanically at their best. Unlike for machines, the essential task for all living creatures is reproduction. Even if one mechanism in an organism is inefficient in terms of dynamics, the organism can survive as a species if it is stable as a system, and it can adapt to a changing environment. The biological systems in organisms maintain “just enough” efficiency, or stable efficiency on average, and not the maximum efficiency they can achieve.

We adopted this concept to develop a micro wind turbine blade that was designed by emulating birds’ wing. Instead of aiming to generate the maximum electricity at the maximum wind speed, we designed a blade that achieves high “average” efficiency over a time span of 24 hours. What we developed is a micro-windmill that generates double the amount of electricity generated by traditional windmills. This is attributable to the design concept of “redundancy.” Organisms have developed systemic redundancy as a result of evolution, and this redundancy renders them adaptable to changing environments. This design concept is in contrast with traditional machine design, which is aimed at maximizing efficiency and minimizing redundancy.

When trying to develop next-generation robots and drones that simulate biological systems, current technology can help in designing the external shape. Still, it cannot help in creating individual parts that function freely in flight, like those in insects and birds. Control theory, as explained in textbooks, does not apply to insects and birds. In order to realize this control mechanism, it is necessary to understand the unique morphology of organisms, their flexible structures and control systems, and how they are suitable for complex movements. Then, we need to adapt and incorporate them into the hardware that we create. I’ve realized this after thirty years of research. In particular, the most challenging task is understanding how to achieve stable flight even under strong wind conditions. Therefore, we are focusing our efforts on this specific area.

To solve the problem regarding control mechanisms, we have developed a trinity platform. First, we “observe” how insects fly and the shape of their wings and movements using a high-resolution camera. Next, we create a virtual model that applies simulations to these observations using a supercomputer and “analyze” the flight performance. Lastly, we apply the knowledge gained from simulations to the “manufacturing” of next-generation robots. We are developing biomimetic robots by repeating these “observations,” “analysis,” and “manufacturing”—the trinity platform—one step at a time.

There are three basic requirements for drones to become useful devices in our life. The first and most important requirement is that they don’t crash in less-than-ideal or suboptimal weather conditions. The second is the reduction of noise levels. Noise can be detrimental to human health, so figuring out ways to reduce noise levels is a major concern. The third is flight distance and flight time. With current technology, drones can fly for only about 30 minutes. However, drones need to be able to fly longer, for example, to deliver medications and blood to patients at a distance. We think that we will be able to achieve longer flights and flight distances and increase speed by making drones “hybrid,” i.e., with fixed wings, like in birds, in addition to rotary wings.

Drones fly because they are lifted by multiple rotary wings like a helicopter, while insects and birds fly by flapping their wings. By examining the relationship between the size and the type of wings of flying insects and birds and their flight dynamics, we found that for drones with wings less than 5 cm long, flapping wings provide more stability, and the drones don’t crash in strong winds. Researchers working on drones are making efforts to downsize drones using rotary wings. However, I do not think it is possible to create something that can maintain a stable flight that way. On the contrary, controlling an object with flapping wings is challenging; therefore, we are trying to figure out how best to solve these wing-related issues.

As I have mentioned earlier, it is important to reduce noise levels in drones. The current large-size drones generate about 80 dB of noise, which is about the same as the noise produced by an ambulance siren. Therefore, we looked at owls as an inspiration, because they fly with almost no sound. Owls use the specialized surface structure of their wings to significantly reduce the loud noise over 2,000 Hz, which is equivalent to that of an alarm system, if not lower. If we can decode this mechanism, we will be able to apply it to drones. We have developed and implemented a drone rotor based on what we learned from owls, and we have succeeded in reducing noise levels by up to 10 dB so far.

Collaboration with companies and researchers

I have conducted research to explore the underlying biological flight mechanisms of insects and birds, particularly in terms of the software side of the structural, kinetic, and control systems that employ these mechanisms. We are currently seeking collaboration with companies capable of manufacturing hardware that can utilize the software developed based on our findings. With support from these companies, we will be able to realize more outstanding achievements by utilizing the trinity platform. I am aiming to develop a control system applicable not only to drones but also to next-generation robots. However, to develop such robots, we will require robot manufacturing technologies incorporating actuators and sensors. Therefore, we want to collaborate with companies that work with such technology.

I also have high expectations from young mechatronics researchers. We have a lot of ideas, but not many researchers are familiar with the “convergent” development of technology based on both software and hardware. We are seeking researchers who would be comfortable handling both.

Chiba University established the Center for Aerial Intelligent Vehicles (CAIV) in 2019. This R&D center develops basic technologies based on biomimetics, artificial intelligence (AI), and design, and aims to foster innovative creations that will lead to intelligent and robust flying robots and drones.

The university has also established a doctoral program called the “Intelligent Flying Program.” This program specializes in drone projects incorporating biomimetics and control mechanisms. We accept doctoral students and research assistants for this program annually, and four applicants have already enrolled so far. We are determined to continue to innovate and realize new technologies, and foster researchers to usher in the next generation of the field of aerial mobility.