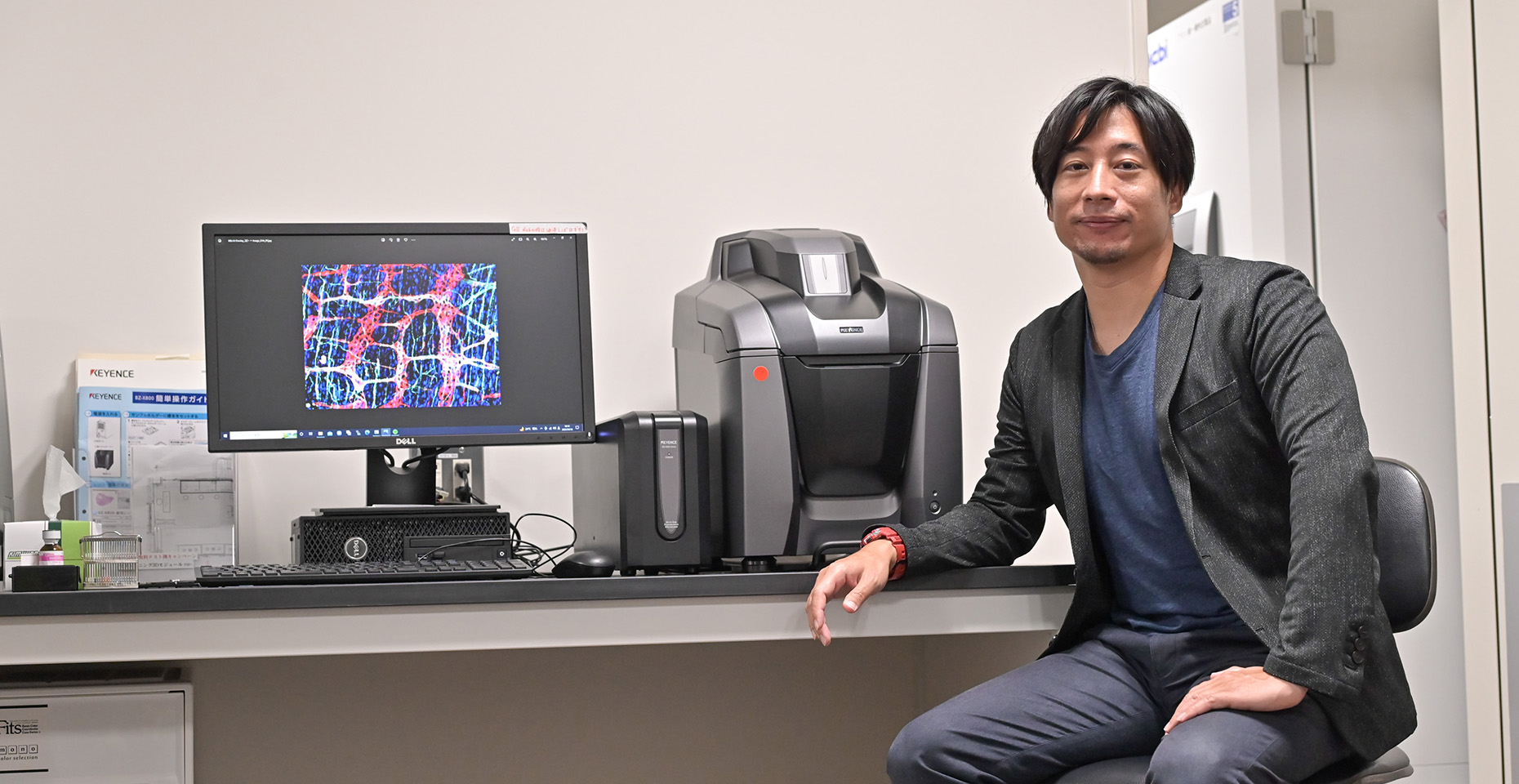 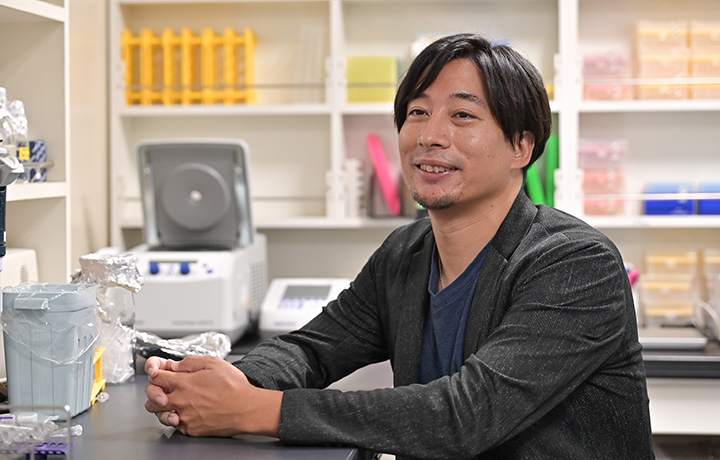 Mucosal immunity—on the one hand—protects the intestines from foreign substances. On the other hand, it can also cause damage to the body. Associate Professor Yosuke Kurashima has been engaged in this puzzle of the dual nature of the immune system. His publications in international journals and the prizes he has been awarded in Japan indicate his dedication to the field of mucosal immunology. Yet, when he decided to enter this field, he was studying in the United States, aiming to become a veterinarian. We asked Dr. Kurashima about his journey to date and his passion for his research.

Please tell us about your research.

Have you ever heard of diseases called Ulcerative Colitis and Crohn’s Disease? Nearly 300,000 people in Japan suffer from these diseases, and 6.8 million people are estimated to be living with IBD worldwide. However, the cause of these diseases is unknown, and no fundamental cures have yet been found.

I started my research career studying intestinal immune cells, named mast cells. These cells are involved in allergic reactions by releasing histamine and inflammatory cytokines, which are one cause behind the worsening of inflammatory bowel disease. I was able to elucidate what occurs in these immune cells when a disease of this type worsens.

Mucosal immunity in the intestines causes inflammatory bowel disease and other troublesome illnesses, such as allergies, and worsens them. We continue with our experiments today, hoping to clarify the mechanisms that can help with the discovery of treatment methods.

When did you decide to become a researcher?

Well, I didn’t think much about my occupation until I became a high school student. My grades were not so good, and so was my attitude.

However, I lived in Africa when I was a child and had a vague dream of working in an African national park. I entered the Department of Agriculture at Meiji University with the aim of studying Zoology and majors Animal Reproduction. During my youth, my dog became sick, and I decided to become a veterinarian. Looking back, I realize that this was not much of a reason, but admittedly, I pursued that route because of that.

While in America studying to become a veterinarian, the September 11 attacks (2001) occurred

But isn’t it true that Meiji University has no Faculty of Veterinary Medicine?

I was studying abroad at the University of Maryland, majoring in Animal Science, as this was necessary to enter a professional veterinary medical school in the States. However, many shocking incidents occurred in the greater D.C. area, including the anthrax attacks and the Beltway sniper attacks. Then, the September 11 attacks occurred in 2001, and that was more shattering than anything else.

One of my university friends lost a relative in the attacks, and the victim count reported by the media rose daily until it reached over 3,000 people. While my friend’s relative was only “1” person among this large number, that “1” was certainly a huge shock to that person and had a major impact on his life.

Looking at that friend, I thought of my grandmother, who was suffering from diabetes. Once diabetes worsens, kidneys are greatly damaged, and patients will be prescribed dialysis for the rest of their lives. A kidney transplant might help, but then patients would have to pass the great hurdle of possible immune rejection.

Certainly, my grandmother, who faced such great risks during her life, was only “1” person. But I thought of all of the other “just 1 person” who required life-saving treatments, and decided to pursue medical research.

That said, still, medical research is a completely different field from Zoology or Agriculture. How did you get accepted?

When I returned to Japan, I rejoined Meiji University as a third-year student. The immune system holds the key to suppressing the rejection reaction. The digestive system is constantly exposed to “outside substances,” including food, intestinal bacteria, etc., but these are not “rejected.” I thought that research in mucosal immunity would provide hints as to why this is the case. So, I went to see Professor Hiroshi Kiyono in his lab at the Institute of Medical Science at Tokyo University. Professor Kiyono is a top researcher in the field of mucosal immunology.

It is certainly rare for a fourth-year university student to change his major and go to a research lab at a different university, one with no connections of his own.

Yes, indeed. Because I was a university student, my supervising professor spoke with Professor Kiyono, and I personally went to make my request. Thinking back, I guess I was pretty aggressive at that time.

The path of research is steep and solitary. There are many failures, sometimes repeatedly. Why Dr. Kurashima keeps going, despite these setbacks?

So, that’s when you started your research on drugs to suppress rejection reactions?

No, actually. Initially, I did not think of connecting my research to pharmaceuticals. Immunology has a long history in medical search, along with infectious diseases. Yet, despite the long-term research conducted by numerous excellent researchers, we still have no means of controlling immunity. I personally did not think that I would make any breakthroughs in this well-mined field.

As such, I turned my attention to a unique and original research field—one that was different from a field crowded with expert researchers. I knew that my decision would entail major sacrifices, and that repeated failures would be my lot. I felt that my pursuit of discovering completely new approaches to research would eventually benefit a large number of people.

A slight change in the arrangement of standard experimental methods led me to gain new insights, and my work gradually became more and more interesting. As I continued my research, I identified new areas within mucosal immunology that had not been worked on and with many unexplored avenues. I was able to decide exactly what I had planned to do.

It is certainly difficult to pinpoint the immunological factors that lead to the occurrence of diseases and their worsening. That’s because numerous factors are tangled up in a complicated weave. That’s why I have approached my research from many different angles and perspectives. These perspectives were not only applied to immune cells, but also extended to factors beyond the cells. One needs to understand the structure and uniqueness of the tissues where the immune cells reside. The structure, which constitutes the intestines, determines the communication occurring between immune cells and foreign matter, including intestinal flora, at the cellular level. Knowing the communication between body organs is also necessary—for instance, understanding how other organs support the intestines when the latter has become weak or damaged.

If the number of new researchers increases in these promising domains, there will be a higher likelihood of dramatic novel breakthroughs in the associated treatment methods. I hope to help create and sustain new and viable research environments in these areas.

Research that explores rich mines also runs the risk of total failure. Where does Dr. Kurashima find the motivation to continue along this difficult path?

Definitely, my sense of this important mission and my inquisitive nature. Certainly, there is no guarantee that I will get the results I desire, and of course, I face many hardships and trying experiences. Nevertheless, there may be people who dare to take the steep and dangerous paths, especially if these can lead to that single discovery that, in turn, will help elucidate a disease’s mechanism and provide clues for its treatment. Maybe I can be one of those people. I hope that the reports I write on my research results can serve as a baton in a relay race and be passed on to other researchers in the near future. For this reason, my daily work aims to uncover overlooked fragments that can lead to major discoveries. The pleasure I get through my research comes from the joy I feel whenever I discover a missing piece.

So, you have a hub in the United States as well.

In 2016, Chiba University established a research hub at the University of California, San Diego (UCSD). That was a game-changing opportunity for us. San Diego is kind of a science Mecca, to the point where it is termed a “bio-cluster.” When I attended an academic conference there, I fell in love—I really wanted to live there! I secured research funding to pursue joint international research, and we made arrangements to conduct the research at the UCSD lab. We successfully performed research activities for about three years in collaboration with a UCSD research group.

It was extremely exciting to interact with top-level researchers and to explore the differences between the American and Japanese research cultures. Personally, I have lived outside of Japan for more than ten years, and there is so much I have gained, not only in my research, but also in my daily life (survival!). I strongly recommend that students and young researchers should spend some time studying abroad.

Do you also pursue a number of joint research collaborations with pharmaceutical companies?

On my visits to pharmaceutical companies in America, I got opportunities to join in on research with experts for each process of pharmaceutical manufacturing, from the basics to exploration, synthesis and preparation, pharmacology, and pharmacodynamics. I also held individual discussions with these experts concerning business seeds. Our own research has led to several results that can serve as seeds for drug creation, and I continue to polish my skills by increasing the scope of my research and by searching for and networking with a large group of personal contacts.

Do you have any concluding words?

I was very grateful to receive the Chiba University Award for Distinguished Researcher, based on our accumulated successes thus far. I am also thankful for all the people who have supported and sustained my research from my student years until today. I intend to continue producing research results in the future. I also find it rewarding to watch young people grow into mature researchers in their academic fields of interest.