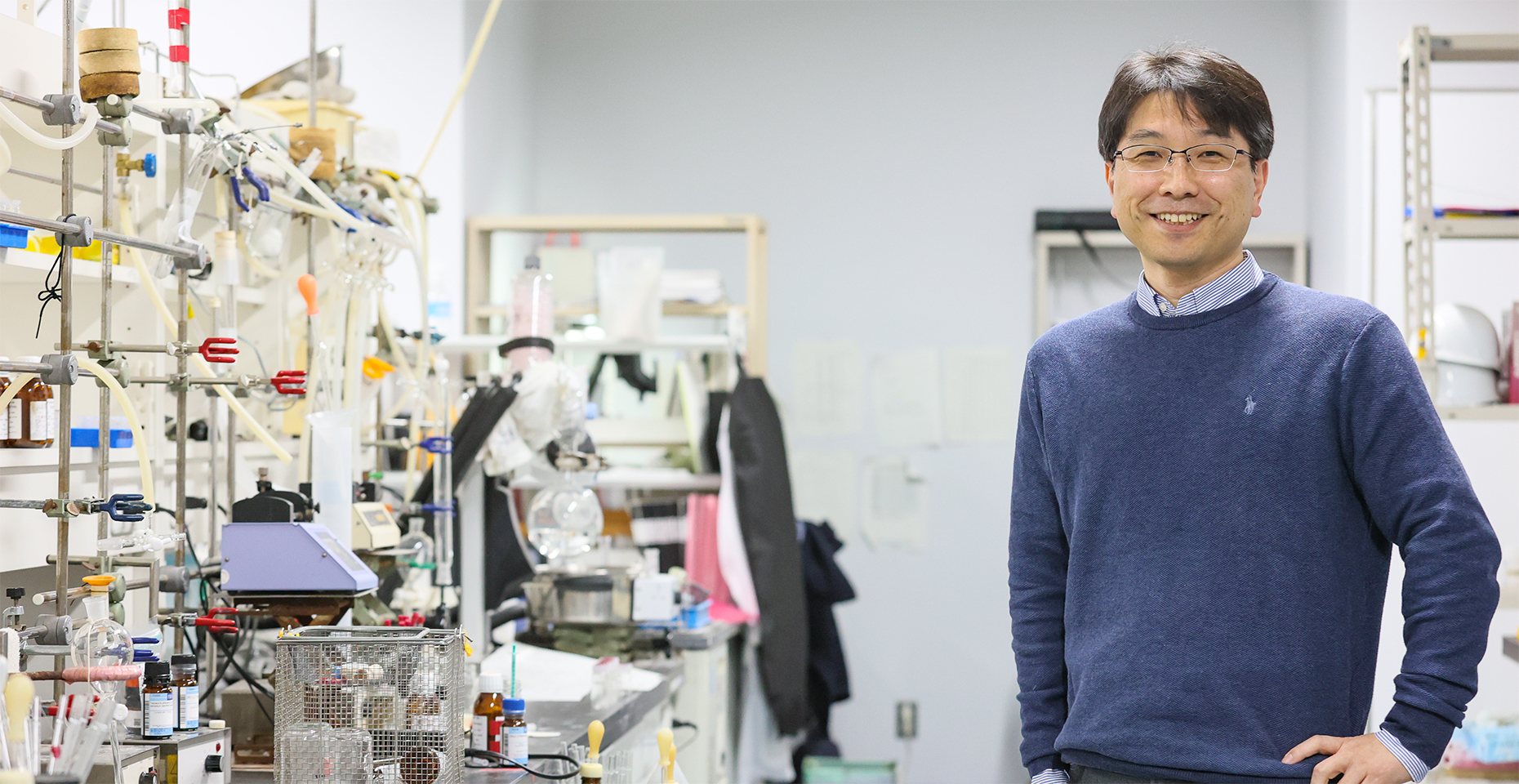 Stepping into a full professorship at the age of 38, Professor Tetsuhiro Nemoto, a Chiba University Advanced Academic Award recipient for the development of multiple new organic synthesis methods, is one of the most noted young researchers.

“Research is a role-playing game; it’s about how brilliantly you defeat the enemy.”

We asked him about his unique and earnest attitude toward research in the context of such statements.

The process of continuous trial and errors

When I was little, I was that typical and ordinary child whose passion was to collect crayfish and beetles, day in and day out. When crayfishing, I neither used tools nor bait. I caught them directly using my own hands. In the garden of my parents’ house, surrounded by rice paddies and fields, there was a tree that attracted beetles. It’s probably hard to believe now, but I caught more than 50 beetles a year without leaving home.

That “ordinary child” progressively got into keeping creatures

During the summer vacation of my fifth year in elementary school, I was tasked to take care of our classroom’s killifish. That was when I was hooked on raising tropical fish. At first, they died within a few days. From that point on, my days were filled with trial and error. I wondered, could it be the water temperature? Water quality? Or perhaps oxygen? I researched and adjusted the environment to be conducive to the growth of tropical fish. This “experimentation” with tropical fish continued until I became a senior in college and began living independently. Towards the end, I was raising large fish about a foot long.

Research that aims to be the world’s best

At the University of Tokyo, where I studied, majors can be decided in my sophomore year. Just as I was considering whether I should go to the Department of Chemistry or the Faculty of Pharmaceutical Sciences, I came across a professor from the Faculty of Pharmaceutical Sciences. He said to us, “When I was your age, I used to go to pachinko every day. Had I studied harder instead of playing pachinko, I might have won the Nobel Prize by now.” The professor may deny having said that now, but the phrase “Nobel Prize” still rings in my head. I remember that day’s class vividly.

I figured if I researched synthesis, I might as well pursue my studies at the Faculty of Pharmaceutical Sciences. I was interested in drug discovery anyway.

Then, when I needed to choose the lab in the winter of my junior year, not a single student showed interest in signing up for that pachinko-obsessed professor’s lab. Then I heard he was holding a solicitation briefing that doubled as a drinking party, so I went.
There, he said something interesting again. It was, “It doesn’t matter what field you pursue. You guys shouldn’t think of doing things in half-measure. Instead, choose a lab where you can aim to be the best in the world.” Then he added, “In my lab, you do that.
Until that point, I had lived my life without particular goals. When the processor spoke of being the best in the world, I was overcome with an unexplainable sense of conviction. I felt spellbound, thinking, “This person might actually be great.”

That professor was none other than Dr. Masakatsu Shibasaki, and it was he who introduced me to the world of catalysts. In retrospect, that was the most important day of my life as a researcher. I had only intended to eat some food and go home!

His claim that his lab was “a lab where you can aim to be the best in the world” turned out to be true. I mean, he has been famous since I was a graduate student, and a potential Nobel Prize winner.

“My hobby is research.” Choosing an environment where one can play to their strengths

For me, catalysts are what transform the ideas in my head into a physical reality. Catalysts fulfill my wishes to create such-and-such substances and my desire to cause such-and-such reactions. The reactions simulated in my mind become a reality in the micro world before my eyes. The joy when such elaborate reactions take place is like no other. I am totally addicted to it. What I am about to say might be misunderstood, but to me, research is a game and a hobby. It’s just that fun.

How are you able to enjoy catalyst research so much?

I think the winning factor is knowing my strengths and characteristics well and choosing an environment where I could make the most of them. I am not a quick thinker, but if I take my time and give careful thought, I can come up with a path that leads me to the correct answer with a high success rate. I enjoy comparing the answers I get in my head with those I get in the real world. Like when I exclaim, “Just as I had thought!” I feel nothing has changed about me since I was a kid catching crayfish in the irrigation canals by the rice paddies.

Find out what you are good at and enjoy doing it. I think if you do that, the whole world opens up for you.

When I first became a researcher, I frequently spent days thinking about the given assignments, and no idea came to me. In reality, it is quite rare for what one envisions to turn out as imagined. Failures followed more failures.
But when I don’t give up and think about all the possibilities and combinations in my mind, after mulling them over and thinking everything through, an idea suddenly occurs to me. These ideas really descend on me when I am driving or taking a shower when I am not focusing on research.

Now, if I search on my computer, I can easily reach a plausible answer. However, if the answer provided via my computer is not linked to actual experiences, it just becomes a theory on paper.
Even when there are papers that claim success, whether they are reproducible in my experimentations is a whole other thing. It is not as simple as just following previous examples and succeeding instantly. I think that the power of human thought plays a vital role at a moment when innovation emerges from nothing.

Lab members are the party members in Dragon Quest

Research is a joy for me. More specifically, it is a role-playing game like Dragon Quest. When I form a research team, I gather people with different capabilities and ways of thinking. Then someone in that group would find a clue to the solution that I would not have arrived at by thinking alone. And it is not always the most talented or brilliant person who plays that role. I think that is one of the interesting aspects of my research field.
You can’t reach the boss by forming a party comprised of warriors. In your team, you also need priests who would heal the damages and wizards who know how to use magic.
In fact, there was an experiment that had been put aside for many years because of failure until someone came along to suggest a way to bring it to success; and we succeeded. We owe that success to the lab’s new member, who came up with a new perspective. Diversity of members would be an important factor as well if we were to innovate.

I ask, “When you clear the missions in Dragon Quest, are you the type who tries to clear them as fast as possible, or do you maximize the character’s level as much as possible to bolster your strength and then battle the boss?” It’s not about which is good or bad, but I ask to get to know the person’s thinking and behavior type.

For those who aim to clear the game as quickly as possible, I assign them a theme that requires thorough focus and investigation into only a single reaction; and for those who seek certainty, I suggest themes that require steady investigations into the entire reaction process from the get-go.
If we assign a theme that suits the student’s personality types, each of them can work on their themes with an approach that suits them, and the probability of achieving their goals increases.

Sometimes the students ask me which type I am. This is the answer I give them: “I am the type that stays up all night to level up my character, then defeats the boss in the fastest and surest manner.”

Diverse members and a leader who discerns their characteristics. These are the two secrets to a successful lab

Catalysts that will change the future of humanity

My role in academia is to create, generate, and shape socially impactful ideas out of nothing. If one could create a single valuable substance, the base would expand, research will accelerate, and innovations will be generated. So above all, it is essential to create something from nothing.

However, concerning new discoveries, it is true that the way we tackle them has dramatically changed since I was a student. In particular, advances in computational chemistry have made it possible to simulate and visualize the functions and structures of catalysts that had previously only been thought of. Undoubtedly, it has changed how we battle in the research arena, particularly in the catalytic and synthetic chemistry fields.
A unique structure that combines synthetic and computational chemistry at a high level, with members versed in the field of computational chemistry—I think these are the strengths of my lab.

We utilize state-of-the-art synthetic chemistry and computational chemistry technologies to shape our ideas into molecules to meet humankind’s needs; pharmaceuticals, agricultural chemicals, and functional materials. I believe that catalysis and synthetic chemistry research will continue contributing significantly to our mission to drive innovation.

That boy, who was just a “typical and ordinary child,” gained the ability to think deeply through massive numbers of trial and errors. People with significantly different skill sets and characters are brought together to turn ideas into tangible things.

Today, he and his party mates are setting off to the dungeon called the research lab to defeat the final boss, known as “Providing the Molecules Humankind Seeks,” in the most brilliant manner.