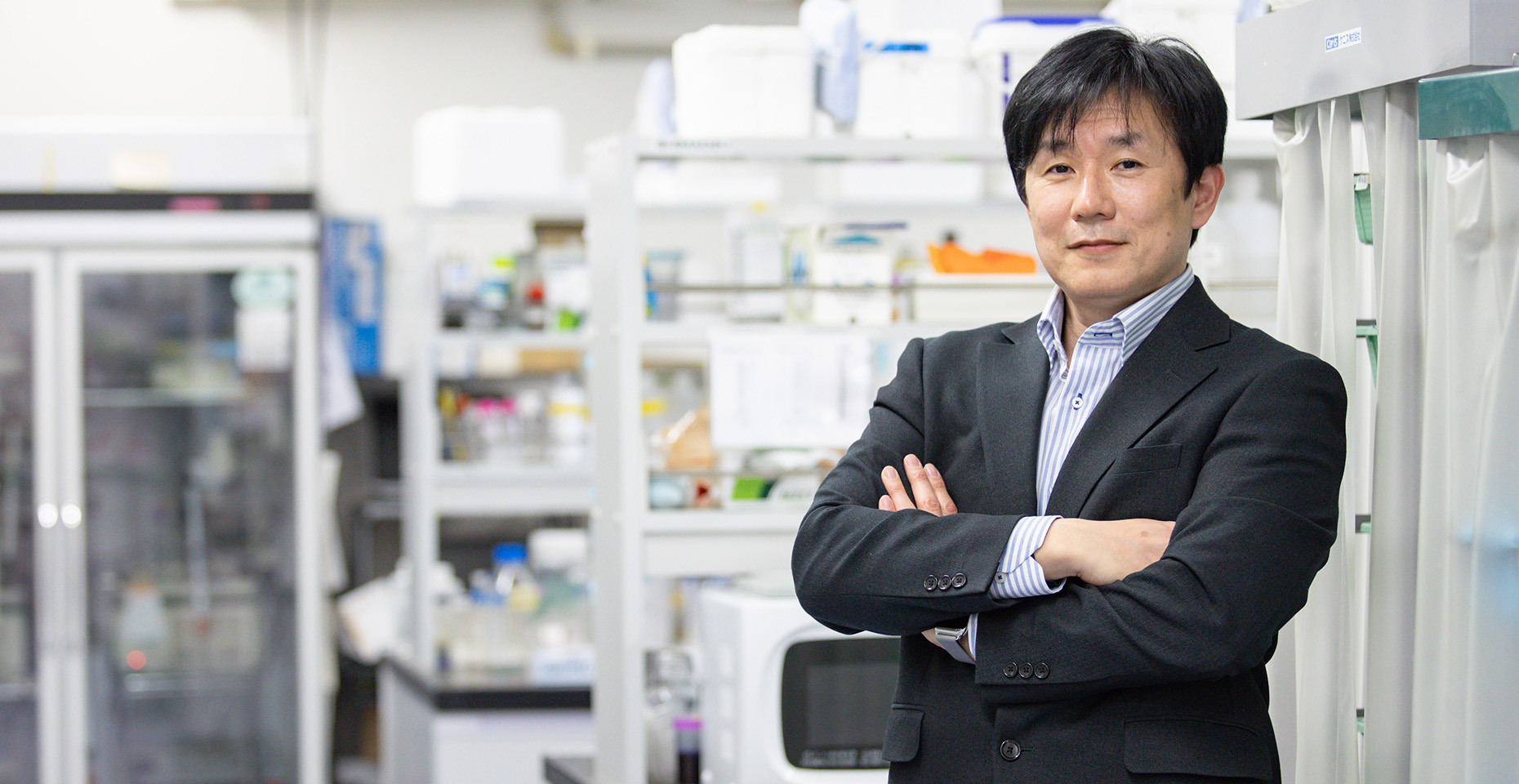 Membrane proteins have not been fully understood, despite more than a decade of research by various companies and universities around the world. In 2021, the Membrane Protein Research Center was established at Chiba University to conduct research on new candidate drugs, as well as to promote collaboration among industry, government, and academia, including even international collaboration. Prof. Takeshi Murata from Chiba University developed a wide range of techniques in membrane protein research, including purification, structural analysis, and screening for inhibitors and antibodies to understand membrane protein structure even before the establishment of the new center. Prof. Murata—who is now expected to play an even more active role in membrane protein research after the establishment of the new center—talks about membrane proteins and his research.

The Role of Membrane Proteins

When most people hear the word protein, they think of nutrients, but it is not an exaggeration to say that our eyes see and our muscles move because of proteins. Everything in living organisms is powered by proteins. Genes are the blueprints of proteins, and most diseases are caused by mutations in genes and subsequent damage to proteins.

Membrane Protein Research Around the World

When I joined Yamato lab at Tokyo University of Science in 1994, the field of biology was full of unexplained phenomena, and I was fascinated by the idea of studying what was not yet known. By studying biology, we can find answers to some fundamental questions like, “What is a human being,” and “Why do we behave the way we do?” We are gradually figuring out what genes are, what proteins are, and how diseases occur. Genes evolve, and over time the simple cells have become humans and plants, and diversity has emerged. There are so many biological phenomena that we do not understand, and it is exciting to discover new things as we study them.

In 1997, Dr. Paul Boyer (US) and Dr. John Walker (UK) won the Nobel Prize in Chemistry for their work on identifying constituent structures of a membrane protein called adenosine triphosphate synthase. Back then, I wondered whether the discovery of these membrane protein structures was really groundbreaking. However, at the same time, I wanted to do research in this field. So, after obtaining my degree in 2000, I joined the John Walker Lab at the University of Cambridge in the UK. While in the UK, I developed a purification technique to extract adenosine triphosphate synthase without destroying it so that I could understand its structure. Later, I succeeded in purifying it and conducted structural analysis of a similar enzyme that Dr. John Walker had analyzed, but at a different membrane part (c-ring) on the enzyme. We published the findings of our study in the international scientific journal Science.

Elucidating the Structure of a Human Membrane Protein

After returning to Japan in 2005, I was selected for the “Special Researchers’ Basic Science Program” at Riken, a large research institute in Yokohama, Japan, and I spent two years there conducting research in the specific fields that I wanted to pursue. Subsequently, I worked under the supervision of Prof. So Iwata at Kyoto University Graduate School of Medicine as an assistant professor. He is a world-renowned expert in membrane protein structural analysis, and it was with him that I developed novel techniques for the analysis of human membrane protein structures. In 2009, I went to Chiba University. There, I used the techniques I had developed and subsequently identified the structure of a human membrane protein (adenosine receptor), in collaboration with Prof. Iwata, which was later published in Nature in 2012.

As the lab at Chiba University grew and our research scope expanded, we applied for a basic technology patent on the analysis techniques we had established, which could be used for studying other membrane proteins. While we worked with pharmaceutical companies on industry–academia collaborative projects, we felt the need to move on to the next stage. Collaborating with pharmaceutical companies allowed us to understand targets according to market demand and then modify our techniques accordingly, if needed. However, we wanted to contribute to society more proactively; as such, we established the Membrane Protein Research Center in October 2021.

The Center will collaborate with researchers from both inside and outside the university, and also with pharmaceutical companies, in order to consolidate basic technologies and promote drug discovery. Our goal is to obtain national research grants, develop drug candidates, and then refine them into revolutionary novel drugs through collaborative research with pharmaceutical companies.

Thermostable proteins provide many benefits. One example is a rhodopsin produced by a bacterium found in hot springs, which can convert light energy into electrical energy. The rhodopsin has a thermal denaturation temperature of 92°C. We improved its thermostability and created the most stable form of the rhodopsin with a thermal denaturation temperature of 115°C. Because the rhodopsin does not break down even after boiling, it may be useful as a material for optical devices, or “eyes” in robots, and sensors in the future. It also has the potential to be used as a photovoltaic cell because it transduces light energy. We are currently working with Prof. Shishido from Tokyo Institute of Technology,  who is an expert in polymer materials, to create the smallest and most efficient photovoltaic cell in the world.

We believe that membrane proteins can be used as a part of artificial cells in the future. There is even a possibility of power generation and clean energy production by exploiting the energy conversion mechanisms of these proteins. Therefore, in addition to drug discovery, membrane proteins have several other potential applications.

Creating Unique Things That Do Not Yet Exist in the World

In the world of scientific research, it is crucial to identify and recruit talented people. In Japan, the number of students enrolling in doctoral programs is decreasing. Therefore, Chiba University provides support in various ways to encourage enrollment in doctoral programs. Once students obtain a doctoral degree, the degree will stay with them for the rest of their life, anywhere they go—even in other countries. I was able to get acquainted with Dr. John Walker through just one e-mail, and that was because of my doctoral degree. In my lab, we encourage our students to collaborate with companies on joint research projects and participate in academic conferences. I am aiming to foster such individuals who will be interested in exploring original research themes after graduation and expanding their knowledge.

I believe that the field of membrane protein research has immense potential. Our field can contribute to the wellbeing of humanity by creating unique things that do not yet exist in the world, be it novel theoretical calculations, drugs, or antibodies. Like research on the novel coronavirus, our research might also save the world someday. The opportunities and technologies available in this field can really help eager and dedicated researchers to conduct some very innovative research. Of course, there are challenges in every field of research. Our lab’s aim is to assist students with their research dreams through our innovative technology and improve their chances of finding success and satisfaction in this field.