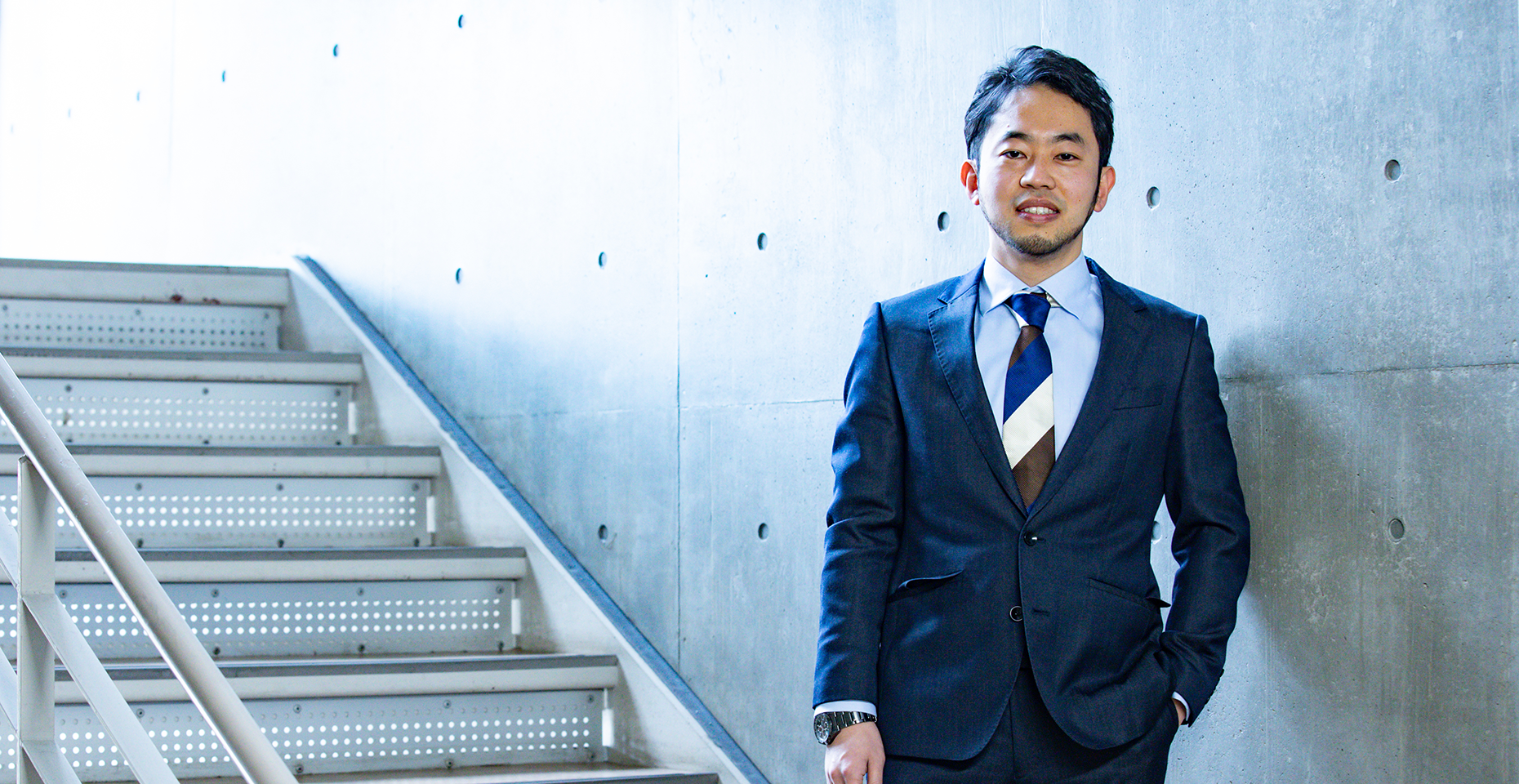 The joy of revealing the unknown: The challenge of solving the mystery of the Sun Associate Professor, Graduate School of Science, Chiba University Hideyuki HOTTA

In 2021, the supercomputer Fugaku successfully reproduced the thermal convection and magnetic field of the solar interior by using super-high-resolution, high-precision calculations. The person behind this achievement was Dr. Hideyuki Hotta, Associate Professor of Chiba University. The outstanding reputation that Associate Professor Hotta has earned in many fields is demonstrated by his impressive list of awards, including the Chiba University Award for Distinguished Researcher, the Astronomical Society of Japan (ASJ) Young Astronomer Award, and the Ministry of Education, Culture, Sports, Science and Technology (MEXT) Young Scientists’ Prize. Dr. Hotta’s research ranks among the best in the world in terms of its precision and the coding required to achieve it. What motivates him to tackle such ambitious projects? We asked him about his past experiences and his research.

The ability to directly compare simulated images with reality: A unique and exciting characteristic of the Sun

I am a graduate of Toho High School, the same school as Prof. Saku Tsuneta, the Director General of the National Astronomical Observatory of Japan. I have loved physics since junior high and high school. In general, physics at the university level is mainly focused on statistical and quantum mechanics, which requires a different way of conceptualizing from what students learn at high school. However, I found the Department of Earth and Planetary Science at the University of Tokyo conducted a wide range of research on planets, earthquakes, oceans, atmospheres, and others. As many courses allowed students to learn in-depth, things similar to high school physics, I thought that here was a place where I could pursue the kind of physics I loved.

Sunspots contain events that would never happen on Earth

At university, I intended to study the oceans and the atmosphere, but my supervisor at the time, Associate Professor Takaaki Yokoyama (currently a professor at Kyoto University), advised me that research areas involving magnetic fields might be more enjoyable. Just like the circulation of hot water in a bathtub, thermal convection exists around sunspots, too; it occurs even without a magnetic field. However, sunspots themselves have a magnetic field, so the interaction of the magnetic field and the circulation causes phenomena that would not occur on Earth. The Earth also has a magnetic field in its inner core—which behaves in a similar way to the Sun’s—but it can’t be seen. On the other hand, solar thermal convection can be observed. I decided to study the Sun because I found it interesting to be able to compare simulated images created in research with real ones.

When I was a senior undergraduate student, I had an opportunity to watch a stunning video of sunspots produced by the calculations of Dr. Matthias Rempel of High Altitude Observatory, USA. That had a great impression on me. It was what inspired me to do these kinds of calculations by myself.

The results of numerical simulations that solve mathematical equations are indistinguishable from real sunspots, demonstrating the validity of the simulations. Dr. Rempel continues to calculate sunspots assuming that they are already there, and his approach is at the cutting edge of research in the world. I decided to study sunspots from a different perspective and research why these magnetic fields are formed inside the Sun. This has been my approach since I began my research 14 years ago as an undergraduate. I am a person who gets bored easily, but my enthusiasm for this theme has not waned all this time.

Getting closer to the real Sun: The challenge of understanding the Sun’s interior

In 2012, I was invited to join a project in which Professor Ryoji Matsumoto of Chiba University was a participant. I was given access to the supercomputer K developed by RIKEN in partnership with Fujitsu. Although the equations for solving the solar problem were already determined at the time, we found that the method commonly used to solve the equations throughout the world could not speed up calculations. Thus, we did not exploit the performance of the K. was starting from scratch. So I used methods no one else had used for convection calculations. As a result, I came up with the idea that the larger the supercomputer, the faster it gets.

Computation permits the extraction of knowledge on the physical order of the world from a vast amount of data. However, the internal flow of the Sun is a mess at first glance, and there are hundreds of terabytes of computed data that we don’t know the results of. We need to decipher what is actually happening from this huge amount of data, as well as what the overall order is, and how to maintain the flow on a large scale using our knowledge of physics. To do this requires a completely different set of skills from programming.

Since we can’t observe it directly, we have to simulate similar conditions to understand the interior of the Sun. As the ultimate goal is to understand the solar interior, we need to simulate an environment that is as close to the real Sun as possible. Inside the Sun, there are swirling vortices of turbulence. The typical size of these vortices is about 200,000 km, and perhaps the smallest vortex is only a few centimeters. It is so difficult that it would take several hundred years to reproduce it precisely, even with a supercomputer. However, we still want to get as close to it as possible. We are working toward this goal passionately every day.

The joy of studying the Sun and the required qualifications for solar research: In pursuit of the thrill of discovering the unknown

During the course of conducting numerical calculations and producing results, there are rare moments when I find that I am the only one who understands something that no one else in the world understands. This is the joy of research.

I first experienced this joy when I was a Ph.D. student. I discovered why a layer of slowing angular velocity from the interior of the surface of the Sun occurs near the surface.

The presence of such a layer had been predicted around 1970. Still, the conditions leading to its formation were not theoretically understood. After a series of numerical calculations, I was able to reproduce it for the first time in the world. I didn’t immediately realize why I was able to reproduce it, but during a discussion with other graduate students, it hit me, “This is definitely it!” Words cannot express the joy of that moment.

Partly because of my experience playing rugby in high school, I like to move forward, tackling problems head-on. When I thought of how to move forward in my research, I realized that I couldn’t move forward without challenging myself to do something difficult. I decided to prioritize the things other researchers were not willing to do and the things that only I could do. When I presented my plans at research conferences overseas, people sometimes said, “You are too ambitious.” Exploring the unknown can be intimidating, but it is also an excellent opportunity to assure people that there remains something worth researching.

The following are the main research themes that I plan to explore in the future. All of these are challenging goals that are difficult for a single laboratory to achieve:

Why the 11-year sunspot cycle occurs is still a mystery, and it is claimed that a Nobel Prize will be awarded to whoever solves this. I’ve been thinking about this for a long time, trying to understand why there is an 11-year cycle. If we can figure out the solar cycle, we may be able to solve the mysteries of other stars whose magnetic fields fluctuate over five years to several decades. By understanding this, we can then determine the effects on other planets orbiting that star.

Nowadays, the habitable zone—or the distance from a star shining with an intensity of light at which life is possible—is a hot topic of debate. Some stars cause more explosion phenomena than the sun, and a flare could have a profound impact on life. If we can theoretically elucidate not only the distance, but also the magnetic field activity, we will be able to determine what kinds of stars can support life. Since it is impossible to do this alone, we would like to collaborate with various research institutes and universities.

Think long and deep. It will be an asset for the rest of your life

I think this kind of research is gratifying for people like me who liked physics in high school or who studied physics in university but liked high school physics better. What I keep in mind in my education is to “think long and deep.” Once you enter the workforce, you will be in a race against time, and you will be expected to deliver output in a day or two. If you keep doing that, your thoughts will become shallower and shallower. Therefore, while you are in the laboratory, I want you to think deeply about a single problem before giving up, even if it takes months. I would like you to think deeply and on your own for as long as you are at university. I believe that this kind of experience will be a lifelong asset, both while conducting research and while working in a company.